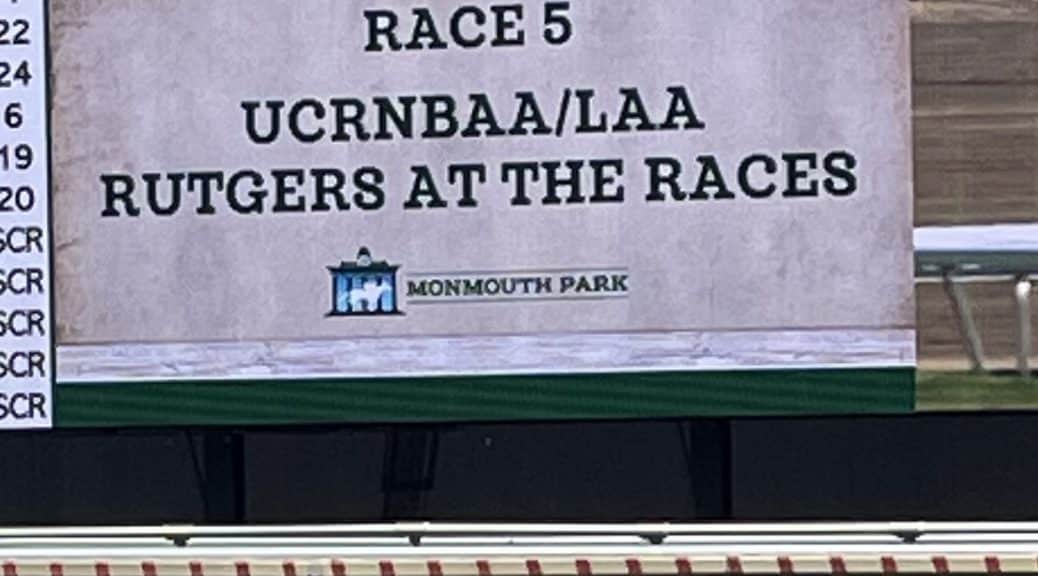 It included a buffet lunch served on the clubhouse patio terrace. There was a private betting booth, and the location was perfect for trackside viewing.

Executive Board and Council

Livingston College created a time capsule on the occasion of its 30th anniversary in 1999-2000, and closed the capsule on April 18, 2000. The capsule is on a shelf in the double-height Great Hall of Tillett Hall on Livingston Campus.

The time capsule project and its contents were described in an article in the Livingston Alumni Association’s newsletter of summer 2000 by Ruby Keise of the Rutgers News Service, as reprinted below. The time capsule is to be opened in 2029, the 60th anniversary of the opening of Livingston College.

Faculty, staff and students at Livingston College wrapped up the celebration of the college’s 30th anniversary on April 18, by filling and closing a time capsule during a ceremony in The Great Hall in Tillett.

Among the items in the capsule are photographs of students dating back to the 1970s; an old term bill from 1969 indicating a tuition of $280 for the semester (Spring ‘00 tuition was $2,381); old student ID cards; and a 1973 recording by the Liberated Gospel Choir, a Livingston student group. The choir, which has continued to grow throughout the years, sang two selections for the capsule-closing ceremony.

Several personal items left by students were added to the capsule during the ceremony. Students also left messages written on archival-quality, acid-free postcards that were made available by the Time Capsule Committee, headed by students Michelle Massie, Melissa Carpini and Marcella DiBenedetto [Editor’s Note: pictured above].

“When Livingston opened its doors in 1969 with some 800 students, the university very much needed the social and intellectual jolt that Livingston was to supply,” stated Martin Gliserman, an associate professor of English and an early faculty member at Livingston, who was among the speakers at the ceremony. There have been great changes at Livingston over the years, he reflected, both in the physical plant — in the beginning there was “one elevator on campus that my 90-year-old father could beat any day” — and in academics.

Programs such as urban studies, Africana studies, anthropology, Puerto Rican studies, computer science, marketing, and women’s studies originated at Livingston and have all now been integrated into the
general university curriculum.

The closed capsule will be housed on a specially built shelf on the wall of The Great Hall. It will be opened in 30 years when the college celebrates its 60th anniversary.

Need to contact LAA? We’ve got several ways to do so.

Diamond, a reporter for WCBS Newsradio 880, joined Miller, Director of Undergraduate Studies at Rutgers’ School of Communication and Information, in a one-on-one conversation about covering New York City in good times and bad.” Watch a one-hour video of the event.

From Rutgers to the National Security Beat

Salama has covered U.S. foreign policy and national security issues for nearly two decades, reporting from more than 80 countries. A native of New York, she earned a bachelor’s degree in journalism from Rutgers University, a master’s degree in Middle East politics from Columbia University and a law degree from Georgetown University.  Salama previously covered the Trump White House and national security for the Wall Street Journal, CNN and NBC. Before moving to Washington, she served as Baghdad bureau chief for the Associated Press, during which time she covered the Islamic State group in Iraq and Syria, as well as Iran’s growing influence across the region. She also covered the refugee and IDP crisis spurred by the violence, visiting camps across the Middle East. The experience inspired Salama to write a children’s book, The Long Journey Home, about an innocent Syrian boy who is forced to flee his home because of the war.

Over the course of her career, she has called Iraq, Egypt, Pakistan, Israel and the Palestinian territories, and the United Arab Emirates home. She has also reported more broadly from five continents, with extensive experience in several East Asian countries as well.

This page lists all programs sponsored by LAA or of interest to the Livingston community held since Jan. 1, 2018.

The Livingston Alumni Association (LAA) organizes a variety of programs, where Livingston alumni can socialize and network, and celebrate the history and legacy of Livingston College. These programs include: