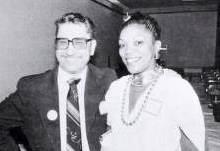 Sourced from the program for the 1987 Reunion of the Livingston College Association of Graduates and from News from the Rock, Spring 1988.