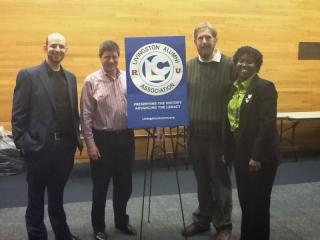 As alumni, we feel a special connection with Livingston, Rutgers, and its students, which makes the Alumni-Student Speed Networking Night such a successful event. This event provides current students with support and networks to help them with their transition into becoming our future alumni.

At Speed Networking, alumni will have the opportunity to mingle over a light dinner.

Students participating in the program meet with a series of alumni in three-minute intervals, stressing the importance of networking and that every alumnus or alumna is an important resource.

Students can network with alumni throughout the evening to get advice and networking tips toward their career and post-graduation paths. Alumni from all job fields, including business, finance, marketing, human resources, nonprofit, government, education, entertainment, and legal, join us each year.

The most recent Speed Networking event was held Wednesday, October 4, 2017, at the College Avenue Student Center.