This page lists all programs sponsored by LAA or of interest to the Livingston community held since Jan. 1, 2018.

The Livingston Alumni Association (LAA) honored two faculty members and six alumni from the former Livingston College of Rutgers University-New Brunswick, at an awards dinner on Tuesday, March 20, 2018, held at the Rutgers Club at the Livingston Dining Commons.

The program is being organized by the Rutgers University–New Brunswick Libraries and the Livingston Alumni Association, and will consist of a short panel discussion and a reception, where you’ll be able to browse display cases of Livingston College memorabilia, and meet up with fellow alumni, university staff, and students from the current Livingston Learning Community. We’ll also present the Riki Jacobs Livingston Pride Award to Eshan Kaul, SEBS’19, RWJMS’22.

Admission is free and light refreshments will be served. Guests are welcome!

Watch a one-hour video of the event.

Livi at 50: A Remembrance of Livingston College: Latino Studies and the Livingston Panthers Sports Teams
Our “Livi at 50” celebration continues with a special program on April 22 at 7:00 p.m. Eastern. We’ll take a look back at the events that led to the formation of the Latino Studies program at Livingston, along with a remembrance of the Livingston College Panthers sports teams! Iris Martinez Campbell LC’75, SSW’81 will moderate a discussion about the Latino Studies program with Margie Rivera LC’72, Grizel Ubarry LC’74, and LAA President Jeff Armus will lead a discussion about the Livingston Panthers with Lucille Lo Sapio LC’76, BernaDette Session LC’75, Dwight Williams, defensive coordinator of the Panthers, and Rick Williams LC’74, a member of the team. You’ll be able to share your memories and ask questions throughout the evening.

Join us at 2 p.m. May 2, 2021, for a live virtual All Alumni Theater Afternoon as we go “Behind The Curtain” with the LTC.  Students from Rutgers’ premier musical theater organization will perform songs from your favorite musicals in this exciting showcase.  The event will also include interviews with cast members about their performances. Register here; a link will be emailed prior to the show.

Join us on June 8, 2021 at 7 p.m. Eastern for a conversation with Vivian Salama SC&I ’00 LC ’00, who covers national security for The Wall Street Journal, based in Washington.

Salama has covered U.S. foreign policy and national security issues for nearly two decades, reporting from more than 80 countries. A native of New York, she earned a bachelor’s degree in journalism from Rutgers University, a master’s degree in Middle East politics from Columbia University and a law degree from Georgetown University.  Salama previously covered the Trump White House and national security for the Wall Street Journal, CNN and NBC. Before moving to Washington, she served as Baghdad bureau chief for the Associated Press, during which time she covered the Islamic State group in Iraq and Syria, as well as Iran’s growing influence across the region. She also covered the refugee and IDP crisis spurred by the violence, visiting camps across the Middle East. The experience inspired Salama to write a children’s book The Long Journey Home about an innocent Syrian boy who is forced to flee his home because of the war.

Over the course of her career, she has called Iraq, Egypt, Pakistan, Israel and the Palestinian territories and the United Arab Emirates home, but has also reported more broadly from five continents, with extensive experience in several East Asian countries as well.

6:00 pm – 7:00 pm
Livingston: A Governor, a College, and the Long Echoes of Slavery at Rutgers (RUAA Virtual Event)

In this virtual presentation, Robert Snyder LC’77, a professor emeritus of journalism and American studies at Rutgers–Newark, will talk with Jesse Bayker SGS’19, digital archivist for the Scarlet and Black Project at Rutgers–New Brunswick, who will discuss Livingston’s life.

Brooke A. Thomas, an African American history doctoral candidate at Rutgers–New Brunswick, will share the importance of Livingston College to Rutgers, why it was created, and how activism was one of its important contributions to Rutgers. Thomas is also a co-author of the chapter “We the People: Student Activism at Rutgers and Livingston College, 1960–1985” in Scarlet and Black, Volume 3.

Livingston College graduates Snyder and Debra O’Neal LC’87 will share their experiences of educational innovation and campus activism from the mid-1970s to the mid-1980s. The discussion will end with a question-and-answer forum. 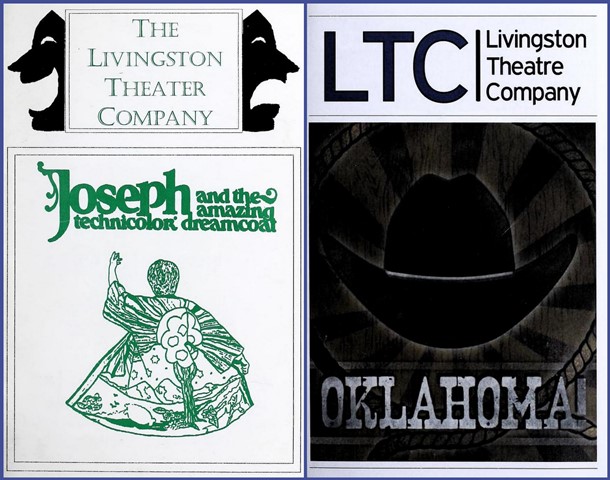 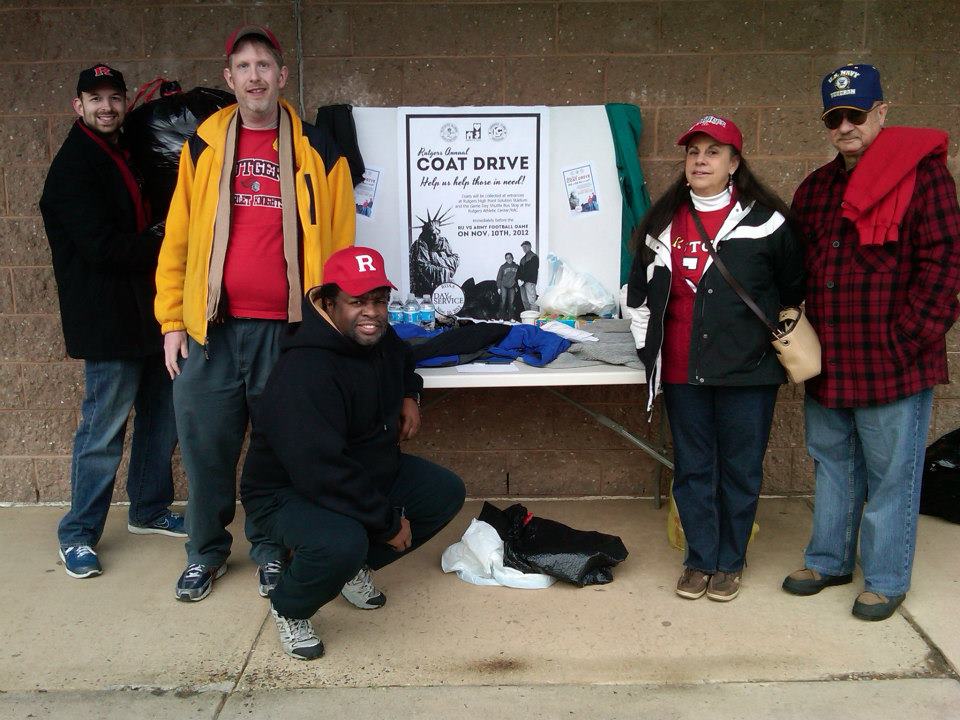 The Day of Service, organized by the Rutgers University Alumni Association, called on alumni (individuals and organizations) to give back to the community on or around the university’s annual Charter Day of Nov. 10.

The Livingston Alumni Association (LAA) and the Rutgers Alumni Association (RAA) collected 1,170 new and gently used coats at the November 10 Rutgers-Army football game, outside both High Point Solutions Stadium and the Louis Brown Athletic Center (RAC). The coats were donated for distribution by Jersey Cares, a nonprofit community organization that supports those in need.

In Wilmington, Delaware, Debra O’Neal, LAA’s first vice president, honored both the Day of Service and Veterans Day at the Historic Riverview Cemetery. 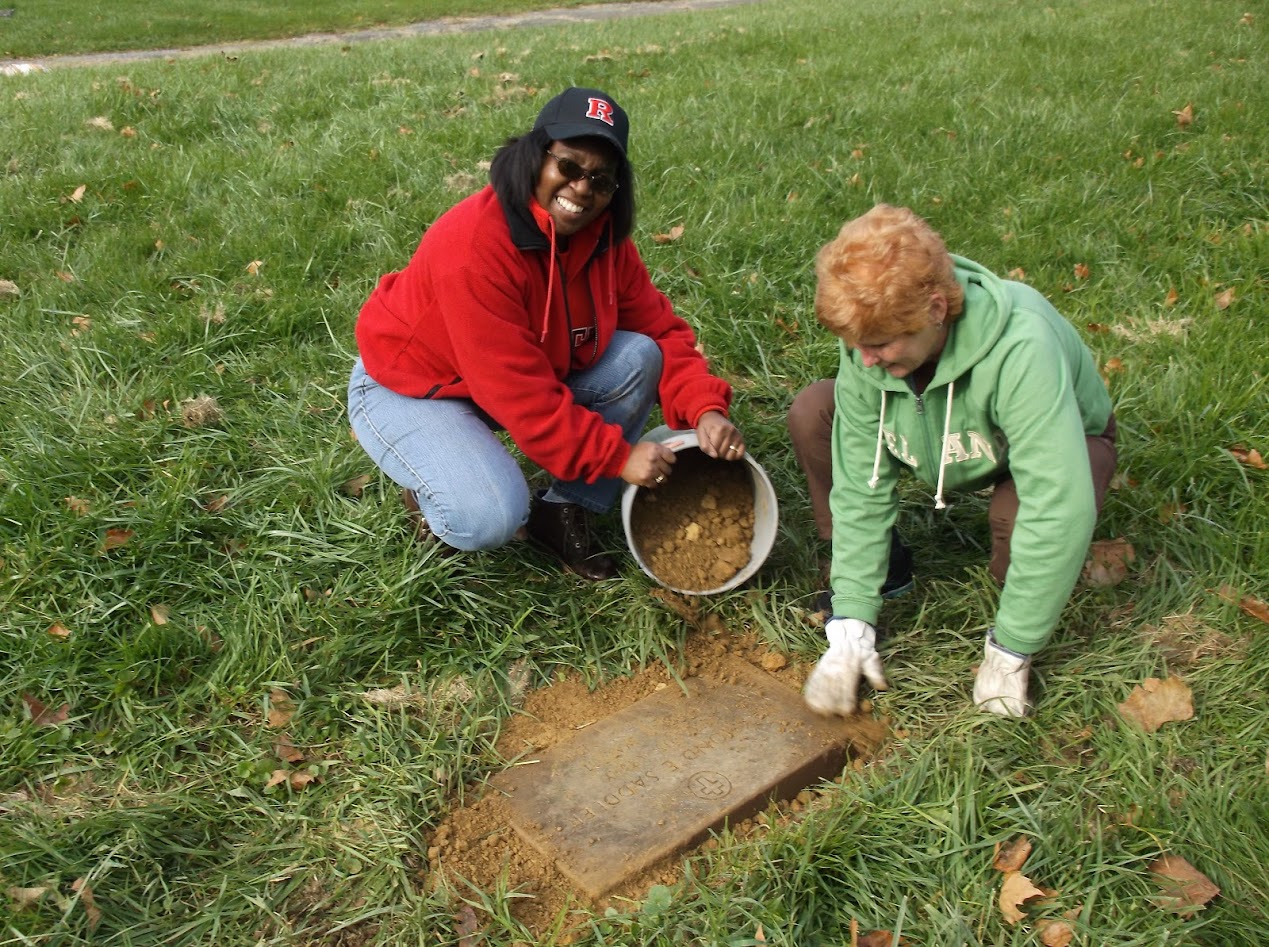 The Friends of Historic  Riverview Cemetery (FHRC) organized a “marker raising” on Nov. 10. Volunteers with FRHC visited the east side of the cemetery in Sections 18, 18-U and 18-S (along Eastlawn Avenue). Many veterans have been interred in these sections and the flat markers have sunken over time.

“We formed teams to raise markers, add crushed stone, and re-set them,” O’Neal said. “We raised 23 markers this morning! It was an honor to hear the stories of volunteers who have served in the military as we worked to restore and preserve the honor of those vets who were interred.

“The FHRC were glad that I chose this project as my Rutgers Alumni Day of Service Project. I had a chance to explain the purpose of the Rutgers Day of Service and the number of projects going on in New Jersey and around the country. Two volunteers have family in the New Brunswick area and were familiar with Rutgers. They welcomed me back again.”

In the aftermath of the storm, Rutgers temporarily housed more than 800 evacuees from Atlantic County on the Busch and Livingston campuses. Rutgers Focus covered the university’s efforts to provide emergency shelter.

Pictured: (Top) Livingston College alumni at the coat collection at the RAC. (Bottom) Debra O’Neal, LC’87 (left) assists in the marker raising in Delaware. Check out additional photos from the two events.