The undergraduate and business library on Rutgers University’s Livingston campus was renamed for James Dickson Carr, the first African-American graduate of Rutgers College, on February 8, 2017. The library was dedicated to Carr on October 17, 2017.

Carr, who lived from 1868 to 1920, had attended Rutgers Grammar School, completed his Rutgers College degree in 1892 and was a member of the Phi Beta Kappa honor society. He was one of the first African-American college graduates in the Northeastern United States.

According to a 1985 biography of Carr in the Journal of the Rutgers University Libraries, after graduating from Columbia Law School, he served as an assistant district attorney of New York County and held other offices in New York City government. He accomplished all of this despite many obstacles due to racial discrimination. In 1919 Carr wrote a remarkable letter to Rutgers President William H.S. Demarest protesting the action of the Rutgers football team to pull Paul Robeson from a game because the opposing team would not play against a black player.

Built in 1971 and formerly known as the Kilmer Area Library or the Kilmer Library, the James Dickson Carr Library is located close to the center of campus and adjacent to the Livingston Student Center, according to a Rutgers University Libraries announcement about the renaming. The library is a popular spot for students who can study with friends at the tables on the first floor, find a quiet carrel on the second, or use one of the largest computing and printing labs on campus. 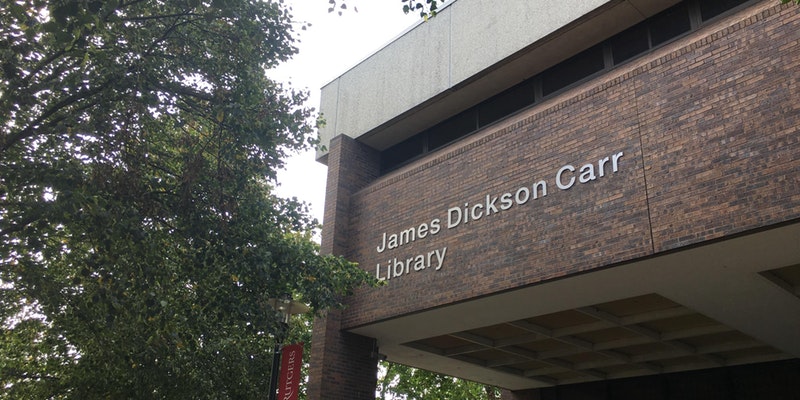 “The Libraries are honored that one of our spaces will be named for James Carr,” said Jeanne Boyle, interim assistant vice president for information services and director of New Brunswick Libraries. “By all accounts, he was an excellent scholar and we hope students who use the Carr Library in the future will find inspiration in the personal story of ‘one of the best known of New Brunswick students,’ as he was described by his fellow student Henry Kimball Davis.”

Rutgers’ Board of Governors renamed the library for Carr as part of the university’s response to enact recommendations by the Committee on Enslaved and Disenfranchised Populations in Rutgers History. The committee, formed to examine Rutgers’ ties to slavery and the displacement of Native Americans, created the Scarlet and Black Project and has produced the book, Scarlet and Black, Volume 1: Slavery and Dispossession in Rutgers History.

The Board of Governors, at the same meeting on February 8, 2017, named the College Avenue Apartments for Sojourner Truth, a former slave who was owned as a young girl by the family of Rutgers’ first president, Jacob Hardenbergh, according to a Rutgers press release. After escaping to freedom, Truth (c. 1797–1883) became an abolitionist and women’s rights activist.

The 14-story Sojourner Truth Apartments opened in fall 2016. The first floor is known as the Yard and features communal areas and green spaces, along with retailers and restaurants. The board also voted to name the walkway from Old Queens to the Voorhees Mall as Will’s Way, in honor of Will, a slave who laid the foundation of Rutgers’ iconic administration building.

The university plans to install plaques at the apartments and the library to tell the stories of Truth and Carr and to put a marker along Will’s Way, said Antonio Calcado, executive vice president for strategic planning and operations at Rutgers.