Emilie Transue has been selected as the recipient of the 2014 Riki Jacobs Livingston Pride Award, given by the Livingston Alumni Association (LAA) at Rutgers University.

Throughout her college career, Transue has merged her studies with awareness and action related to understanding and helping those in the community with medical or neurological challenges, including children and their families, and her fellow students.

For almost two years Transue has worked as a peer mentor for Rutgers students with Autism Spectrum Disorder (ASD), through the College Support Program (CSP). Transue has worked extensively with two mentees, help them achieve social, academic and professional success.

Transue wrote in her application essay that her work with CSP has helped her to educate others about the struggles faced by people with ASD and disability, particularly resident and apartment assistants, who are taught to recognize students who need additional services and how to create appropriate social support systems.

For two years Transue also has been the Rutgers chapter leader of Project Sunshine, a nonprofit organization that provides free educational, recreational and social programs to children and families living with medical challenges. For example, Rutgers students visit with the children and plan parties or other activities for the children, helping the children to focus on personal development as well as medical treatment.

She has also served as a classroom aide or assistant at the New Brunswick Free Public Library and at Rutgers’ Douglass Developmental Disabilities Center.

For three years Transue has developed her honors thesis by investigating two neuronal proteins involved in dendritogenesis and neural networking, at Rutgers’ Firestein Laboratory. She also has shadowed physicians at the Child Health Institute of New Jersey and the Robert Wood Johnson University Hospital.

Transue maintained a 3.9 grade-point average and earned multiple scholarships and dean’s list recognitions in her college career at Rutgers-New Brunswick’s School of Arts and Sciences, from which she graduated in 2014. She dual-majored in cell biology and neuroscience, and Spanish, with a minor in psychology. She began studies at the University of Connecticut School of Medicine in fall 2014. 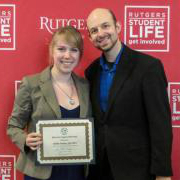 Transue was honored at the Rutgers Student Life Scarlet Awards on Tuesday, May 6, 2014.

The Riki Jacobs Livingston Pride Award is given annually to the Rutgers-New Brunswick graduating senior who most embodies the spirit of Livingston College and its attributes of leadership and social action.

The award is named after Riki Jacobs (1957-2009), a guiding light in the fight against HIV/AIDS in New Jersey for more than 25 years. At the time of her passing, New Jersey Governor Jon Corzine called Jacobs “an articulate and compassionate voice who was highly respected for her efforts to ensure health care access for those living with, infected with, and affected by HIV.”

“Emilie Transue has brought attention and has lead efforts at Rutgers to help individuals with developmental disabilities and medical challenges,” said Jason Goldstein, LAA president (pictured above with Transue), who presented the award. “Her exemplary achievements have shaped lives.

“Livingston College was focused on building communities by engaging diverse perspectives,” Goldstein noted. “We are proud to present Emilie Transue with this Pride Award for her efforts in serving those individuals who require a voice and assistance.”