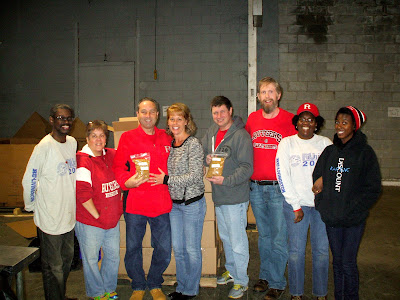 Members and friends of the Livingston Alumni Association of Rutgers University (LAA) volunteered at the Community FoodBank of New Jersey on Saturday, November 8, 2014, as part of the fourth annual Rutgers Alumni Day of Service.

The Community FoodBank of New Jersey began operations in 1975, where President and CEO Kathleen DiChiara began distributing groceries out of the trunk of her car. Within months she created a food bank as part of the Archdiocese of Newark.

Today, the Community FoodBank distributes 40 million pounds of food a year to more than 1,000 non-profit programs, as well as more than 400 programs served by its Partner Distribution Organizations (PDOs). Through their combined efforts, they feed 900,000 hungry people in 18 New Jersey counties.

The LAA volunteers, along with volunteers from other community groups, helped package bags of various pastas, which were boxed and loaded onto pallets for distribution to food pantries throughout the state.

The Day of Service, organized by the Rutgers University Alumni Association, brings together hundreds of alumni volunteers to make an impact in their own local communities, all in the name of Rutgers, all on one day. Rutgers University’s commitment to service dates back to its founding fathers on Rutgers’ Charter Day, November 10, 1766. Thus, this program is inspired by the actions of Rutgers alumni and their long tradition of service. 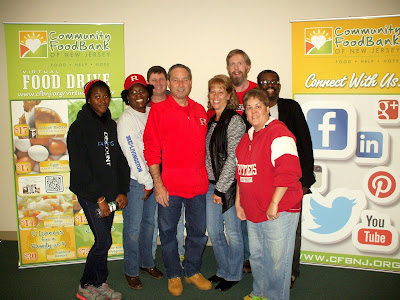