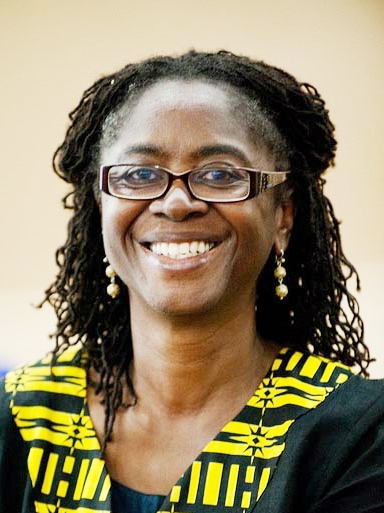 Abena Pokua Adompin Busia, a Professor of Women’s and Gender Studies and of English at Rutgers-New Brunswick’s School of Arts and Sciences, was named as Ghana’s Ambassador to Brazil in July 2017.

On August 2, 2017, she was sworn to that post by Ghana’s President, Nana Addo Dankwa Akufo-Addo, in a ceremony at the President’s residence, Flagstaff House, in Accra, Ghana.

In 1998 the Livingston Alumni Association (LAA) at Rutgers University named Professor Busia as an Honorary Member to recognize her contributions to Livingston College. She joined the Rutgers faculty in 1981.

Professor Busia served as the Women’s and Gender Studies chair from 2011 to 2017, and also formerly directed Rutgers’ Center for African Studies. She teaches courses in African American and African diaspora literature, colonial discourse and black feminism.

Her scholarship keeps her actively connected to her native Ghana, where a Fulbright-Hays Group Projects Abroad Grant enabled Professor Busia and two Rutgers historians to lead an interdisciplinary program on “Teaching the History of the Slave Trade Routes of Ghana and Benin.”

Among Professor Busia’s other work with students, she has directed a summer internship taking undergraduates to work with women’s rights organizations in Ghana and has led Rutgers’ study abroad program to Ghana. In 2005 she was one of several professors who led a discussion with students surrounding the Dalai Lama’s visit to Rutgers, as part of Livingston College’s first-year mission course, Building Community.

Born in Accra, Abena Busia settled with her family in the United Kingdom where she earned a degree in English language and literature at St. Anne’s College in 1976, and a Ph.D. in social anthropology at St. Antony’s College in 1984.

She is a daughter of Kofi Busia, who served as Ghana’s Prime Minister from 1969 to 1972, when he was overthrown in a coup d’état, according to an October 4, 2012, article from Rutgers Focus. Abena Busia spent much of her childhood under house arrest and “remembers waking to the sound of gunfire during political unrest,” according to the same article.

She was also an associate editor of a 20-year project which resulted in the publication of Women Writing Africa, a four-volume collaboration published by the Feminist Press at the City University of New York. According to Professor Busia’s Rutgers biography, this collection is designed to recognize the cultural legacy in that assortment of voices by gathering together the original “cultural production” of African women.

Professor Busia is the co-editor of Theorizing Black Feminisms (1993) as well as many articles and book chapters on topics including black women’s writing, black feminist criticism, and African literature. She is also the author of two poetry collections, Testimonies of Exile (1990) and Traces of a Life (2008).