Information and links to documents and photos related to the 50-year anniversary of Livingston College.

The Livingston Alumni Association (LAA), in association with our partners within Rutgers University, has held multiple events and embarked on projects to celebrate and commemorate the 50+ years since Livingston College opened in 1969. These include events specifically related to the college’s history. 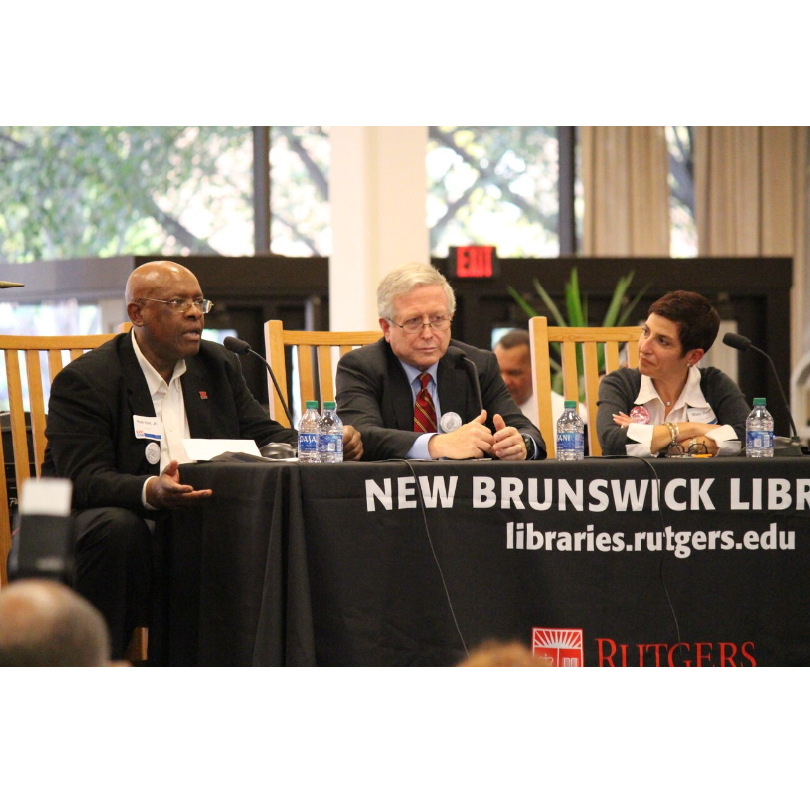 Livi at 50: A Celebration of Livingston College’s 50th Anniversary kicked off with a keystone event at the James Dickson Carr Library on Livingston campus on October 25, 2019. The event was co-presented by Rutgers University–New Brunswick Libraries and the LAA.

It featured a panel discussion of prominent Livingston alumni, a presentation of the Riki Jacobs Livingston Pride Award, and an exhibition from the University Archives of materials including yearbooks, photographs, and other artifacts that captured Livingston’s evolution from its beginnings as the military base Camp Kilmer in the 1950s through the present day.

A panel discussion reflected this diversity, with alumni Noah Hart Jr. LC’73, GSED’88, Staci Berger LC’94, EJB/GSNB’04, and Robert W. Snyder, LC’77 all speaking about their formative years at Livingston and the impact the college had on them. In addition to the panel discussion and audience Q&A, student Eshan Kaul, SEBS’19, RWJMS’22, was named recipient of the 2019 Riki Jacobs Livingston Pride Award.

Livi at 50: A Remembrance of Livingston College: Latino Studies and the Livingston Panthers Sports Teams

Our April 22, 2021, “Livi at 50” online event celebrated the formation of the Latino Studies program and the history of the Livingston Panthers sports teams. Iris Martinez Campbell LC’75, SSW’81, moderated a discussion about the Latino Studies program with Margie Rivera LC’72 and Grizel Ubarry LC’74. LAA President Jeff Armus led a discussion about the Livingston Panthers with Lucille Lo Sapio LC’76, BernaDette Session LC’75, Dwight Williams, defensive coordinator of the Panthers, and Rick Williams LC’74, a member of the team. Watch a replay (58 minutes).

Livingston: A Governor, a College, and the Long Echoes of Slavery at Rutgers

A historical marker on the Livingston campus, placed in 2021, explains its namesake William Livingston’s deep involvement in slavery and his halting efforts to abolish slavery as New Jersey’s first governor.

In a virtual presentation held Jan. 18, 2022, Robert Snyder LC’77, a professor emeritus of journalism and American studies at Rutgers–Newark, talked with Jesse Bayker SGS’19, digital archivist for the Scarlet and Black Project at Rutgers–New Brunswick, who discussed Livingston’s life.

Brooke A. Thomas, an African American history doctoral candidate at Rutgers–New Brunswick, shared the importance of Livingston College to Rutgers, why it was created, and how activism was one of its important contributions to Rutgers. Thomas is also a co-author of the chapter “We the People: Student Activism at Rutgers and Livingston College, 1960–1985” in Scarlet and Black, Volume 3.

Livingston College graduates Snyder and Debra O’Neal LC’87 shared their experiences of educational innovation and campus activism from the mid-1970s to the mid-1980s. The discussion ended with a question-and-answer forum.

This event was sponsored by the RUAA, the LAA, the School of Arts and Sciences, and the Rutgers Alumni Association.