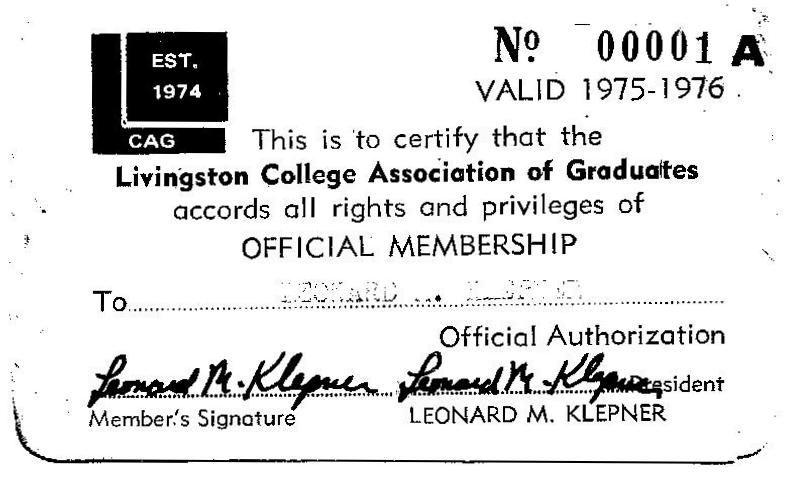 I am a 1972 LC graduate. I was there almost at the very beginning as a transfer student from Temple University in Philadelphia.  The extensive mud that then still characterized the rudimentary campus on the Piscataway plains of the late Camp Kilmer became “Fango,” the campus newspaper’s initial name.

My early mentors in the political science department included the late, monumental Wilson Carey McWilliams and his wife, Nancy. I retain a personally dedicated copy of Carey’s “The Idea of Fraternity in America.”  As possessions go, it’s probably my most cherished.  Both Carey and Nancy took an ongoing interest in my well-being, and I spent time at their Highland Park home. I house-sat for them on occasion before their daughters were born. During those times, my principal duties involved keeping company with their marmoset and huge parrot. The formidable parrot had a pedestal perch so substantial that it had its own room in the house. The other relic I have from this early era is an oil painting by an artist friend of the McWilliamses visiting from California. Signed as “RDG 74,” the piece is a rendering of the Albany Street Bridge and the town of New Brunswick from the Highland Park shore of the Raritan. The piece captures a remarkable scene of the bridge and the town as they were 40 years ago.

Of importance to me during this time were other political science professors, Henry Plotkin, Dennis Bathory and Gerald Pomper. Henry was the first faculty member with whom I met when I visited the Livingston Campus prior to making my decision to transfer to Livingston in 1970. About 25 years later, Henry and I had occasion to be in contact professionally in his capacity with the New Jersey State Employment and Training Commission.  Dennis was one of the kindest and brightest people that I ever met. Beyond the academics, however, the greatest of experiences was the Sunday pick-up softball game in Raritan Park. Students, teachers, friends and their children were welcomed players. I believe I remember a then-very young son of Professor Pomper’s joining the game eventually.

Another fellow student, graduate and alumnus most deserving of recognition for his inspiration to me both during and after my association with Livingston College and as a Rutgers graduate student is the late Amos Danube. Amos was already in his mid-20s when he left Budapest in the wake of the Soviet repression of 1956.  When I came to Livingston, Amos seemed ancient, but less so as I came to know him and likewise grew ancient. His many contributions to the Livingston and Rutgers communities are well known.  I had the privilege of continuing contact with Amos into his all too brief retirement to Florida.  Our friendship became and was at its strongest when he passed away suddenly a number of years ago. I made contact with his daughter and conveyed to her a compilation of email that Amos and I exchanged during his retirement to offer her, if she wished, a glimpse of her father’s life that may otherwise have escaped her.

Most significantly for the historical documentation of the origin of the existing alumni group of Livingston College, is a copy of what is the Holy Grail of Livingston alumni history. The first of the membership ID card displayed with this article is indeed the very first card, No. 00001A, Valid 1975-1976, issued by the Livingston College Association of Graduates (the LCAG), the very first organization formed to represent, advance and benefit those few who had then graduated from Livingston and all thereafter until the present that the Alumni Association has served.

LCAG ID No. 00001A is rarer (as baseball card collectors would know) even than the multimillion-dollar Honus Wagner T206. It is special, and I knew it would be because it represented the earliest graduates that Livingston had to offer. Even then, Livingston graduates understood that the special nature and intention of Livingston required nurturing, maintenance and perpetuation. As LCAG 00001A indicates, I had the distinction of being elected the first president of the LCAG.

Imagine if George Washington were still alive to witness the unfolding of the promise for which he struggled. There is room for argument either way on the question of whether or not Washington would be pleased with the course that our country has taken. However, as the George Washington of Livingston alumni, I have been fortunate and pleased for more than 40 years now to have witnessed the unfolding and establishment of the good to which the LAA has devoted itself and achieved. Ever may it continue to be so.

Leonard M. Klepner is a 1972 graduate of Livingston College at Rutgers University.