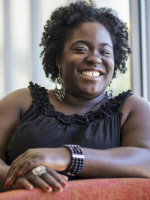 Ndidiamaka (Ndidi) N. Amutah-Onukagha, LC’03, was honored in 2013 as a Distinguished Alumna of Livingston College at Rutgers University.

Dr. Amutah-Onukagha has been an assistant professor at Tufts University’s School of Medicine, Department of Public Health and Community Medicine, since July 2017. In this capacity her research focuses on adverse birth outcomes for women of color, HIV/AIDS and women of color in an urban context, and community-based participatory research.

She had previously served as an assistant professor in the College of Education and Human Services, Department of Health and Nutrition Sciences, at Montclair State University, and was a fellow of the Research Education Institute for Diverse Scholars from 2013-2015.

Dr. Amutah-Onukagha completed her dissertation focused on infant mortality in Washington, DC, and it specifically examined neighborhood level disadvantage, social determinants of health, and race/ethnicity as predictors of infant mortality.

Dr. Amutah-Onukagha has worked as a researcher in community-based research settings in a variety of areas including maternal and child health, health disparities, and HIV/AIDS.

She has published and presented in the area of HIV/AIDS and infant mortality in urban communities.

She also has served as president of the Society for the Analysis of African American Public Health Issues and a director of The Women’s Collective, a nonprofit social service agency for women of color who are infected or affected by HIV/AIDS in Washington, DC.

Video (2 minutes, 3 seconds): Amutah-Onukagha discusses her career and the cultural opportunities she experienced at Livingston College. Open the video in a new window.