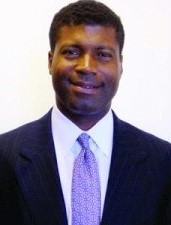 In 2004, the Livingston Alumni Association honored Johnson as a Distinguished Alumnus.

After earning his bacherlor of arts degree in psychology from Livingston College, Johnson attended New York University Graduate School of Business Administration in 1983.

He began his career in retail, serving as one of the youngest managers at Saks Fifth Avenue.

During a summer internship at Salomon Brothers, he was captivated by sales and trading. His skills landed him a full-time job at Salomon and, in 1989, at Merrill Lynch & Co. He was a first vice president of Merrill Lynch’s Managed Solutions Group.

Black Enterprise magazine has named Johnson to its lists of the “Most Powerful Blacks on Wall Street” in 2002 and subsequent years. He also served on the Livingston College Dean’s Advisory Council.