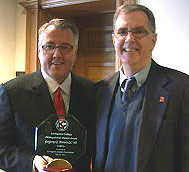 Gregory Q. Brown, LC’82, named as a Distinguished Alumnus of both Livingston College and Rutgers University, is a member of Rutgers’ Board of Governors as of 2021, and previously served as Chairman of the Board of Governors.

Additionally, in 2016 Brown was honored by the Rutgers Alumni Association as a Loyal Son of Rutgers.

Brown is chairman and chief executive officer of Motorola Solutions, Inc. Brown joined Motorola in 2003 and was elected to the company’s board of directors in 2007. He became president and CEO of Motorola in January 2008.

He has been a loyal supporter of Rutgers University in many ways. In addition to his service on the Board of Governors, his contributions to the university include:

Before becoming CEO of Motorola, he headed four different businesses at the company, including the government and public safety, networks, enterprise and automotive businesses. Brown also led the $3.9 billion acquisition of Symbol Technologies, the second-largest transaction in Motorola’s history and an important strategic move to strengthen Motorola’s Enterprise Mobility business.

Prior to joining Motorola, he was chairman and CEO of Micromuse Inc., a publicly traded network management software company. Before that, he was president of Ameritech Custom Business Services and Ameritech New Media Inc. Prior to joining Ameritech in 1987, Brown held a variety of sales and marketing positions with AT&T.